skip to main | skip to sidebar

Is Empathy only present if you are well and well fed?

Starvation Diet. What is it?

Mmmmmm chocolate, Mmmmmm sandwich, Mmmmmm doughnuts, Mmmmmm beer. Spoilt for choice. Trying to resist. When I resist I put the money in a pot. When the pot is full I send it (the money, not the pot) to somebody who needs it to survive. The art comes about through the documentation of the process, here and in other places. There is no end to this project.

I've been a long time absent from this blog. In that time I've well and truly fallen off the wagon. If you are new to the blog or having trouble remembering way back when. I set off to try and resist  things I didn't need to eat and give the money saved to charity.  Over the course of the project I dropped 3 dress sizes and gave over £300 to the charity Practical Action.

Since then the weight has crept back on and the convictions dropped off. A spell in hospital saw me loose lots of weight in a very unhealthy style and then put it all back with some extra. I still try not to buy Nestle products but my discernment about other sweet treats has got a little stretched. I don't always shop local anymore. Instead I shop in what a I've convinced myself is the ethically best of  the supermarkets. I still ride my bike as a commuter but not so much for pleasure or challenge.

The main reason I  stopped, what was a pretty good way of life was probably boredom. The idea no longer sparked my intellect and as my focus on it slipped so did the life changes I'd made.

I've joined a new group Transition Northwich and we are hoping to change the world starting with our back yards. For me this has to come with a review of how I live now and how I could do a bit better.


My preoccupation today has been on local shopping and particularly food. Our Veg buying is covered with a veg box from a local farm. About 50% of the time I  buy meat from the town Butchers, normally a place called Birtwistles. The other time meat gets picked up in a main Lidl shop. I have arguments with others and myself where I say things like,
"Meat and Veg are 30% cheaper from local shops" and yet I sometimes don't make it to the butchers. Perhaps its because I don't really know if that fact is true anymore. So today with a bit more time on my hands I decided to compare the prices.

Its complicated for me because I ask the butcher for a pound of mince but the supermarket stuff comes in grams. I'm not that great at maths. 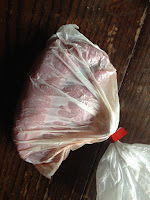 Off I toddled to Lidl to buy the things I can't get locally like coffee and tuna. Whilst there I compared the prices of the meat I'd bought.

Frying steak was in a small pack and of course unlike at the butchers I can only buy the amount they offer. If I'd been looking for an exact amount I'd have to have bought two packs and risk wasting some. But like for like it was: 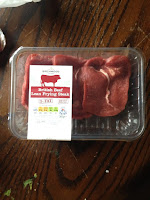 Even I was surprised to find that at the supermarket I like the most, because its cheap and seems the most upfront, the local butcher was not only competing but winning. Tricks like smaller amounts in supermarket packs are well known within consumers minds but it's really hard to work out what it actually means. On the surface the supermarket pack looks cheaper but if we're back there next week because the cupboard is bare its not too good a deal. There is a pervasive mythology put about by big business that because they deal in bulk they are cheaper. That makes logical sense. They can afford to be cheaper and they do a good job of convincing us that this is the case. Each documentary which comes out telling how some supermarkets don't pay suppliers, buy at rock bottom prices or work on vast economies of scale confirms our belief that surely they must be cheaper then.

Even if we put all ethical things to one side and just focus on the bottom line my quick and very fallible look around the shops today seems to show that local is often still cheaper. I am still lucky to have a choice of 3 butchers and 2 veg shops in my town center. I enjoy the little chats I have in the shops and walking along a high street. This isn't nostalgia its here for us lucky Northwich residents now.

I don't yet know how each compares on flavor you'll have to watch this space for that.

WOW to the WOW women

Women of the World (WOW) is a group of refugees, asylum seekers and those who have been granted citizenship who live in Salford. 2 days ago I asked them about wages and costs in different countries and they got together and developed this great list of facts from their wide experiences. Big thankyou and what a great speedy response. If you want to know more about the WOW group look here:
wowwomensgroup.wordpress.com/

Same parents living in the remote village in kenya.
Rent is free as they built there own house
No elec they use lamps
Water free( united nations provided)
Education 4000sh
Healthcare 5000sh
Travel bills 1000sh they walk a lot.
No wages as they sale goods from the firm and manage to pay for the bills and most times the house is full with orphans and they manage somehow.

The many hours of labour which go into an embroidered top

This T shirt took me about 24 hours to embroider. I sat at home on a sofa and watched TV. I had regular breaks to go to the toilet etc and the temperature of the room was comfortable. I chose to make it as an artistic statement and I don't need to sell it to survive. Nobody watches over me and if I decided to do something else for a while I could. I wouldn't be in fear of being sacked or provoking somebodies anger if I worked too slow, fell ill or made a mistake.
This top is a 2013 fashion item from a well know store. The store where it is sold have been found to underpay their workers,(Even by that countries standards) employ children and have people working in unfair or unsafe conditions. Clothes hand finished by the companies workers have retailed for as little as at £4.00. If It took me 24 hours to hand finish my item how do they do it and make a profit?

My new idea is to do a series of performances. During each performance I will embroider a pre printed copy of the original Starvation Diet T shirt I made. I will do this, as much as possible,  under the conditions of an exploited woman from a particular country. I will ask the people commissioning the performance to pay me the wage I would get for my time if I was that woman.  Alongside each performance will be a break down of the my own income and costs of living compared with this other woman.   The performance would end when the T shirt is finished. Each performance would be titled with the name of the country it had depicted. Unlike the person finishing garments for companies I would have the luxury of taking the completed T shirts home with me. I would look to exhibit the T shirts as a series once a number of performances have been concluded.

At the moment I'm looking for galleries, charities or other organisations who would like to commission a performance and people who know those in other countries or the UK who work in the textile finishing trade and would be happy to share info on their lives with me.
Posted by Beth Barlow at 13:24 No comments:

Art Of Protest Exhibition at the Peoples History Museum, Manchester

Was very lucky to get selected to be part of the Art of Protest ran by Noise Festival. Showed a few of the products produced as a result of Starvation Diet Project. Good to see all the other work and meet the Noise team and Mark Thomas. www.noisefestival.com 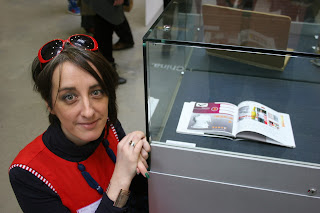 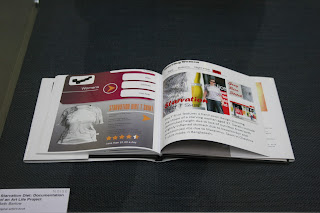 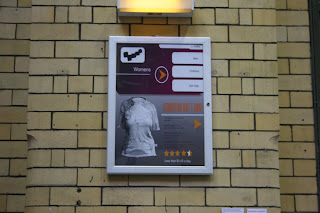 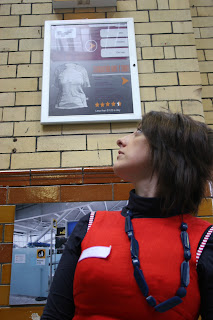 The idea to create an attractive spin around a product which is in many ways distasteful. It happens every day. Can you tell which websites each of them is a parody of? 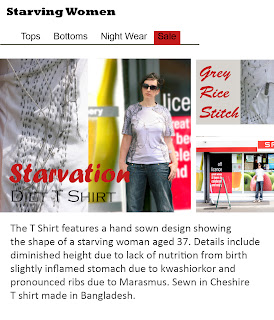 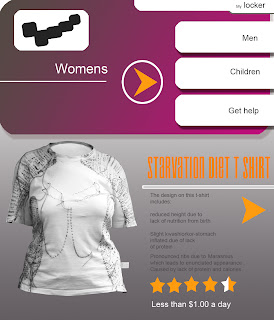 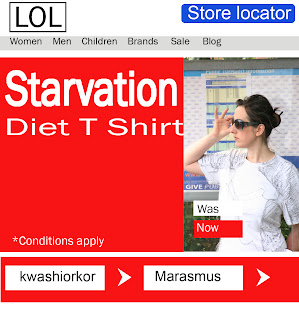 Created a Starvation Diet T Shirt. It is created using a stich called rice stich on a mass produced T shirt from Bangladesh. It shows the outline of a starving woman aged 37. The signs of starvation/malnutrition being the extended belly, ribs, reduced height and general decreased body mass. I took the T shirt on a photo shoot. 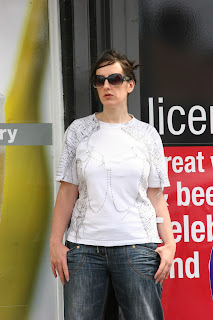 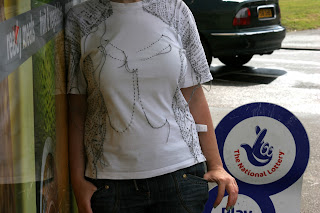 Looks interesting, May have to take a trip over there one day this summer., Manchester City Art Gallery, not West Africa.
http://www.creativetourist.com/featured/dont-look-now-west-african-photography-in-manchester
Posted by Beth Barlow at 07:23 No comments:

Beth Barlow
This site is designed and managed by group member Beth Barlow.

One to donate to if you want to support emergency aid. Help people to rebuild their lives in crises.

Other Blogs or places I contribute to

Other Blogs I look at